Last Updated by Emily Henderson on 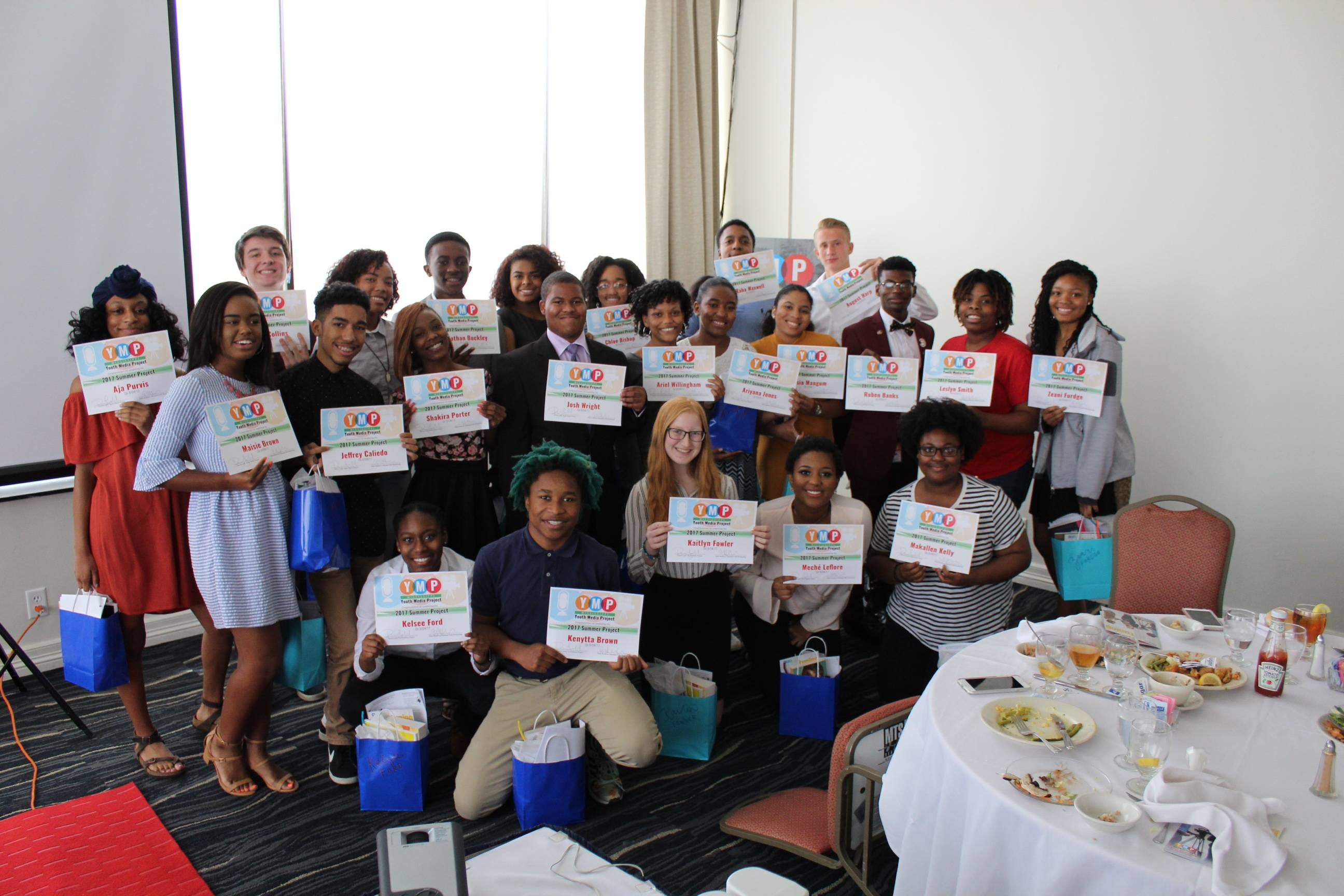 The Mississippi Youth Media Project, Mississippi Public Broadcasting's partner in dropout prevention, recently finished its summer intensive program. The program worked with 29 students ages 14 to 18 from 12 schools in central Mississippi. Each weekday, the group of diverse teens met in the YMP Learning Lab in downtown Jackson from 9:00 a.m. to 4:00 p.m. to tell their own stories and use rigorous multimedia journalism to report on other young people, their communities, the causes of global issues and potential equity-based solutions.

YMP students wrote individual opinion pieces and produced larger group projects. In the first week of the summer program, students participated in a workshop on the basics of writing and interviewing, the foundation of the project to create a positive, safe learning environment. Students were assigned a peer to interview, asking questions that would then be included in a biography written about each student by their partner. This also allows everyone to meet the 2017 YMP students.

After completing the peer biographies, YMP students were assigned to groups determined by individual strengths and interest in specific technological disciplines such as photography, videography, writing, podcasting, music production and web design. Each group met for a brainstorming session with a mentor before choosing a specific topic, event or global issue relevant to their communities to cover throughout the summer. Students then worked for the next nine weeks to source, record, interview, report, photograph and score all work with original content and a narrative or anecdotal lede.

The news packages include a lengthy feature story with accompanying photographs, a mini-documentary, and a podcast. On the final day of the summer program, student groups presented finished news packages to a private audience of around 50 people over lunch at the Capital Club in the Capital Towers building in downtown Jackson.

“Digging Deeper: Confronting Youth Crime’s Causes and Solutions” analyzes youth crime in the city of Jackson. Students interviewed an extensive number of notable people, including those affected by crime, experts in juvenile offenses, elected officials, professionals in law enforcement, legal counsel, and educators. These students are continuing their project now, planning a series of public, youth-led forums in every ward in Jackson culminating in a youth crime summit in spring 2018.

“From Woolworth’s to #BlackLivesMatter: Protesting for Life, Freedom and Dignity” covers the 1963 Woolworth Sit-In, a monumental event in Civil Rights history, to its present-day implications.

“Supporting Black Dollars and Businesses in Jackson, Miss.” interviews business owners in the Farish Street Historical District, Mississippi's largest and only primarily residential district in Jackson on the National Register of Historic Places and reflects on a time when the area was rapidly growing. The area is currently under extensive renovation.

“From Negative to Positive: Jackson’s Young People Fight for a Voice” presents data about the perception of young people and highlights those in the capital city actively working to alter the negative stereotypes shrouding youth.

In addition to group projects, student journalists individually spanned the gamut covering global issues relevant to themselves, their peers and their communities. Below are just a few of the opinion pieces written and revised by students and published online this summer.

Kaitlyn’s opinion piece on healthcare, “Birth Control Not What Many Think, and Saves Lives,” challenges the perceptions on the often uncomfortable subject of healthcare. Her story ends with a call to action to continue sharing powerful stories with strangers, regardless of how difficult it may be to come forward.

Asia’s story, “Black and Bougie: Not a ‘Ride-or -Die Chick’,” weaves her struggles of being different while maintaining an identity she’s proud of.

From his lens as a teenage Asian American male, Jeffrey researches the main demographic audience in films today and draws attention to its lack of representation in “Stop Whitewashing and Exploiting Asians in the Film Industry.”

Kenytta covers the recent inauguration of Jackson's youngest mayor in his story, "At Inaugural, Mayor Chokwe Lumumba Lifts Up Jackson." He offers insightful quotes from the inaugural address of former Mississippi governor, William Winter, and vividly describes the day, including details about the atmosphere during the Mississippi Mass Choir's performance. It was the greatest day he's experienced in Jackson history, he says.

In the two months students worked downtown in the YMP Learning Lab, for some taking an elevator for the first time, they experienced transformational growth.

At the Youth Media Project, there's been significant investment in the students this summer from mentors teaching teens independence, self-motivation and autonomy (collectively, not just individually) while also holding students accountable for high-quality, ethical work and encouraging students to sustain and continue projects after the summer program finishes. A group of YMP students from this summer are continuing their project on youth-crime prevention.

MPB's executive director, Ronnie Agnew, visited YMP students this summer to share about his work in media and governance. He had this to say about his time at YMP:

"When I entered the room and witnessed the attentiveness of the students, I found it hard to believe they were high school students. Their behavior, their desire to absorb all that was taught, suggested that I was meeting with students further along in their studies. ... For people who believe media is in crisis, I have bad news for them: While it is definitely being redefined, news and information and the demand for it, aren't going anywhere. That makes what the kids are learning this summer extremely important."

This summer, 29 students from central Mississippi were acutely aware of the influence that stories can have on others when crafted with hard work and perseverance by active learners. There is a commitment to equity, inclusion, and racial healing within cohorts of young people in Mississippi that has been unseen before in the state. The students this summer were placed in situations wholly unfamiliar to them before now, reporting on mature topics they had little or no knowledge of, collaborating with peers they normally wouldn't on a regular basis and responding to misperceptions of youth with passion, grace and resilience.

But it also takes adults equally-committed who are prepared and trained for the role of mentoring young people and supporting students as they become community liaisons and coordinate with other peers, families, and public and private sector leaders, advocates, policy-makers, experts and educators. It takes adults who have a relentless determination to see young people thrive, and that work begins by engaging students in open dialogue, seeking to understand issues relevant to them, nurturing individual strengths through active mentorship and changing the narrative for young people.

To learn more about the Mississippi Youth Media Project, you can find information and other student projects at jxnpulse.com.