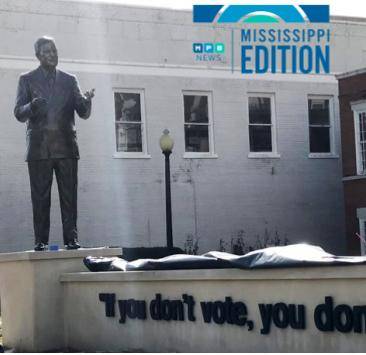 A civil rights leader is honored.

And the Mississippi Department of Education considers adjusting its accountability model.

Plus, the high school football season comes to a close with Championship Weekend.

Vernon Dahmer was a voting rights activist in the Hattiesburg area during the Civil Rights movement. His life was taken following a firebombing on his home by White Knights of the Ku Kux Klan in January of 1966. Now, his legacy is being honored outside the the Forest County Courthouse through efforts made by David Hogan and the Forest County Board of Supervisors. MPB's Michael Guidry speaks with Dennis Dahmer, son of the fallen civil rights leader, about his father and the new monument to his memory.

The Accountability Task Force met Thursday at the Mississippi Department of Education to discuss the accountability model that measures student achievement. At the heart of the conversation was the United States History exam. The State Board of Education is currently considering eliminating the test from its accountability model. MPB's Ashley Norwood talks to Dr. Tim Martin (Superintendent of Clinton Public Schools) about the task force's objectives.

Dr. Eddie Peasant (Superintendent of Starkville-Oktibbeha Public Schools) agrees that the US History course helps in developing critical skills. But as he tell's MPB's Ashley Norwood, he doesn't think the exam is essential to ensuring the course is taught to a high standard.

﻿Six high school football champions will be crowned this weekend at M. M. Roberts Stadium on the campus of the University of Southern Mississippi. Don Hinton of the Mississippi High School Activities Association says he is excited about the upcoming games in Hattiesburg as he discusses with MPB's Michael Guidry.