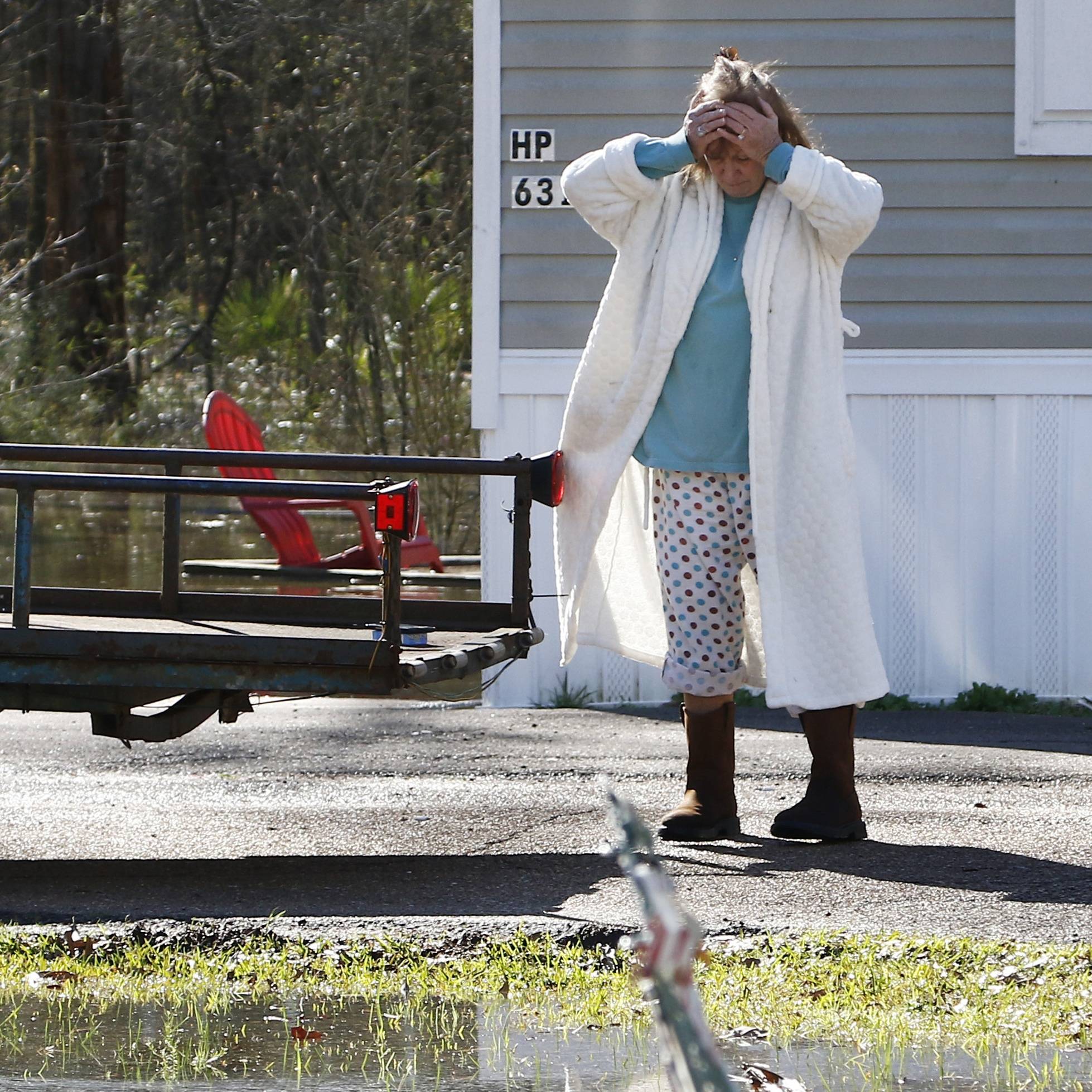 Donna Harvey reacts at having to evacuate from her mobile home
AP Photo/Rogelio V. Solis

Ridgeland, Miss. (AP) - Trash cans and ducks floated through a neighborhood along a rain-swollen river in Mississippi on Friday as residents packed up what they could and fled to higher ground to escape what authorities warned could be devastating weekend flooding.

The Pearl River, which meanders through residential and business areas near Jackson, may reach a level not seen in more than four decades, forecasters said. So Leti Vargas enlisted help from relatives to clear appliances from her double-wide in the Harbor Pines Mobile Home Community.

"I've worked too hard to purchase these, and I don't want them destroyed," said Vargas, 50.

Nearby, Donna and Mark Harvey put blocks under big items like furniture and left with what they could carry ahead of the rising water.

"Can you imagine we left Florida to come here and get washed out? People warned us about hurricanes in Florida and it's the rains that wash us out," said Donna Harvey.

Nearly a foot of water surrounded dozens of mobile homes in the community; lawn chairs, trash cans and mallards floated around under a sunny sky. With much of the area under mandatory evacuation orders, police patrolled for security, and firefighters went door-to-door telling residents they needed to leave.

A few miles to the south, flood maps showed waters could cover streets in downtown Jackson and be within a few blocks of Mississippi's Capitol building by Sunday, when the Pearl was forecast to crest just a few feet below what it reached during a major flood in 1979.

While downtown Jackson is normally quiet on weekends, a Mardi Gras parade scheduled for Saturday and a two-day regional volleyball tournament could be affected by rising water.

As much as 10 inches (25 centimeters) of rain pelted a wide section of Mississippi from Monday through Thursday, the National Weather Service said. On the Tombigbee River, homes were surrounded by muddy floodwaters at Columbus.

Flood concerns extended into neighboring Alabama, where more than 7 inches (18 centimeters) of rain fell in places this week. Some people already have been forced to flee from low-lying homes, and flood warnings covered thousands of aces of land along rivers.

James Everett, senior manager of the Tennessee Valley Authority's River Forecast Center, said on a media conference call the utility was taking advantage of a respite from the rain to release water from some reservoirs to bring lake levels back to normal. More than 8 inches (20 centimeters) of rain fell in the valley.

"The good news is, with this break in the rainfall we will expect to see some of these locations like in north Alabama and down below Pickwick Dam begin to reach their max levels today or tomorrow, and we should start seeing levels come down across the weekend at most locations," he said.

In Florence, Alabama, the river was headed down after reaching nearly 7.5 feet (2 meters) above flood level on Thursday.

Back at Vargas' community, her 18-year-old son Mario got ready to leave with a load of household items in the back of a pickup truck.

"Mom, do you want me to leave the hand truck outside?" he called out.

"Yes, you'll be coming right back," she said.