Miss. Activists Reflect on the 50th Anniversary of the Voting Rights Act of 1965 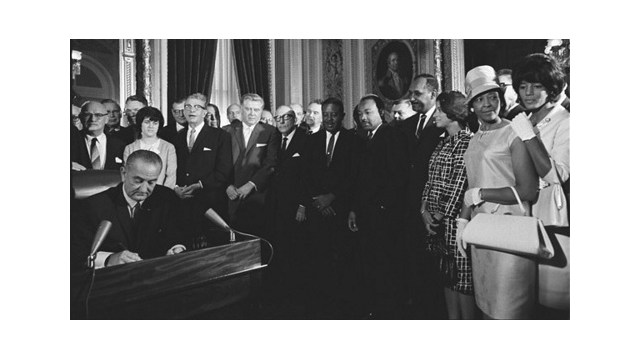 August 6th marks the 50th anniversary of the landmark Voting Rights Act of 1965. In this report, MPB's Desare Frazier takes a look at the struggle for the vote and what lies ahead.

The passage of the Voting Rights Act was a time of jubilation for people who believe in the Democratic process, where everyone has a voice. Civil Rights Activist Flonzie Goodloe Brownwright felt like a first class citizen.

"It represented the culmination of the tears, the deaths, the murders, the jailings, the beatings, the bombings. It represented kind of a success of the kinds of things that we had been involved in to achieve that," said Brownwright.

The law, signed by President Lyndon Johnson in 1965, removed barriers that prevented blacks from exercising their 15th Amendment right.  It was in 1964 that Rev. Rims Barber traveled from Chicago to Canton, to register black voters. Organizers recruited white college students from the north to work with a project called "Freedom Summer." The killings of three workers in the program,  21-year old James Chaney, 20-year old Andrew Goodman and 24-year old Michael Schwerner ignited support for the law. Rev. Barber.

"I'm afraid that many people don't remember what life was really like back then. Segregation was not subtle and it was dangerous," said Barber.

Hollis Watkins worked with the NAACP and the Student Non-Violent Coordinating Committee. He still sings the freedom songs that motivated him in the face of intimidation and death threats.

"I went to jails, went to the county farm and even ended up going to Parchman for getting black people registered to vote," said Watkins.

Flonzie Goodloe Brownwright says blacks had to take a literacy test to vote. She answered a two-page questionnaire that included "how many feathers does a chicken have" and "how many jelly beans are in a pound?" She then had to pull a question from a cigar box. It said "what does Habeas Corpus mean?" She gave her best answer.

"And he looked at me and looked at the paper and he said 'Well you didn't pass,' just so hatefully.  I said 'well sir,' I said, 'What was my mistake?' He said 'Nigger I told you, you didn't pass. Get the hell out of my office,' " said Brownwright.

Brownwright had to wait 30 days, took it again and passed. Fast forward some 50 years and Derrick Johnson, President of the Mississippi NAACP, says the Voting Rights Act led to political advancements for many blacks, including President Barack Obama.

"There are very few African Americans in this country who were elected, and their election is not a direct result of the Voting Rights Act," said Johnson.

Despite the gains achieved, longtime Mississippi NAACP Attorney Carroll Rhodes is concerned about efforts to suppress the black vote.

"There's been a constant fight ever since it was passed to roll it back, and it's only been since 2010 that the efforts to roll it back have really picked-up momentum," said Rhodes.

The Brennan Center for Justice is a non-partisan law and policy institute. They found after the 2010 midterm elections, 22 states passed new voting restrictions. Eighteen were controlled by Republican leaders. The National Council of State Legislatures reports 34 states have passed photo ID laws, including Mississippi. Proponents of the law in Mississippi say it reduces fraud. NAACP's Derrick Johnson contends the restrictions can shave three or four percentage points off voter turnout in close races.

"And some elections are determined by as few as one vote or five votes," said Johnson.

In 2013 the U.S. Supreme Court ruled that section 4b of the Voting Rights Act is unconstitutional. Johnson calls it a set back. The ruling mandated certain states no longer had to obtain U.S. Justice Department approval before making changes that affect voting, including Mississippi. Supporters of the court's decision say discrimination has been eliminated and the law is outdated. Congressional Democrats have introduced a bill to restore that section of the law. Looking ahead, Johnson wants voting made easier.

"Australia has what's called 'compulsory voting.' That is something we should implement here in Mississippi. Voter registration is absolutely unnecessary. If you're a citizen of this state and you're citizen of this country, you should automatically be listed to vote," said Johnson.

Rev. Rims Barber who is now in his 70's agrees. He didn't go back to Chicago and made Mississippi his home. He believes people must be vigilant about protecting voter rights.

"Their mission became mine because it's not over. It's never over. The struggle goes on and on," said Barber.

And so does the debate over the future of the Voting Rights Act.