Water Not The Only Danger With Flood in Mississippi

Posted by Jeffrey Hess on 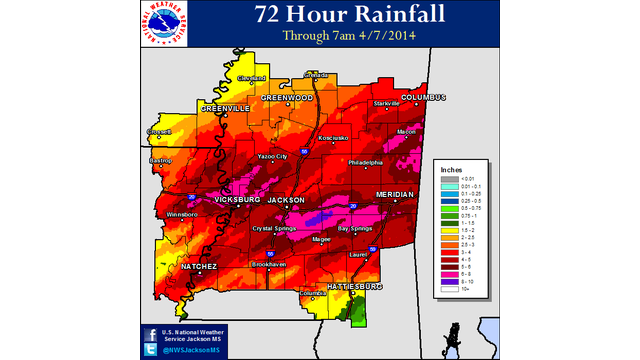 Flood waters that are currently sitting in much of Central and Southeast Mississippi could be contaminated with sewage and other chemicals. MPB's Jeffrey Hess reports that officials are also warning about displaced animals.

The days of heavy rain flooded several rivers, which have inundated sewage systems and other waste disposal sites around the state.

As a results, Jim Craig with the Mississippi Department of Health says drowning is not the only danger that comes with flood water.

"Flood waters have septic products, raw sewage, industrial and agricultural chemicals. If you or your pets have contact with flood water, you should wash thoroughly with soap and water," Craig said.

Craig says people who have not had a tetanus shot in the last ten years should get one if they come in contact with the water.

The problem is especially bad in areas of Jackson, where high waters overwhelmed sewer collection system and pump stations.

The city is under federal order to improve its infrastructure due a history of sewage overflows.

The high water brought by up to ten inches of rain could push a variety of animals into place they are not normally seen.

Colonel Steve Adcock with the Department of Wildlife Fisheries and Parks says it is best to leave the animals alone.

"You will see wildlife that has been displaced. Leave them alone they are already stressed out and as soon as the water goes down they will return. This will include reptiles. The best thing to do is keep your distance," Adcock said.

Officials say to stay out of the flood water to avoid encountering animals, like snakes and alligators.

Adcock also says that the department is on the lookout for recreational boaters who are attempting to site see through flooded areas.

Even though the water is receding, officials are concerned that rain in the forecast could worsen the problem.