Posted by Evalina Burnett on 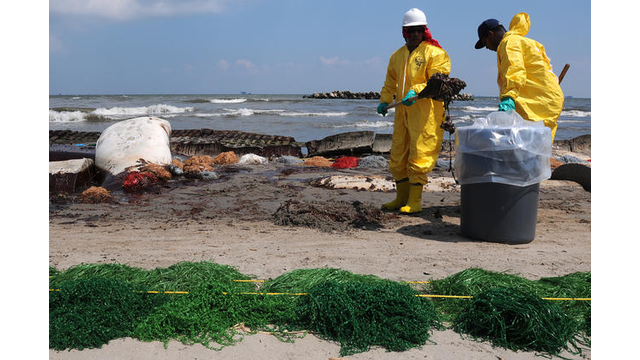 Workers who did clean-up work after the BP oil spill appear to have higher rates of depression and anxiety. That's among the findings of a National Institutes of Health study of nearly 33,000 oil spill responders.

Thirteen percent of the study participants are from Mississippi. Lead researcher Dale Sandler says the early results show the prevelance of depression was about 30 percent higher among those who had clean-up jobs.

"We're still working to characterize people's oil exposures and other relevant factors, so at this point it's too early to know if the increased frequency of mental health symptoms in workers is because of exposure to oil and dispersants, or something else in the oil spill experience and its aftermath," Sandler says.

Sandler says the study also asked about health symptoms, such as wheezing, coughing or dizziness. She says the study is intended to look at long-term health effects and will last a decade or longer.

"While it does appear that some symptoms like wheezing and cough may be more common among workers, even a few years after the spill, it will be many years before we can know if the oil spill had an impact on the risk of developing chronic diseases, such as lung disease or cancer," Sandler says. "Or whether these early symptoms will persist or resolve over time."

Spill workers and coast residents who've had medical issues they think are spill-related can file medical claims. The BP medical settlement was reached last year, but only took effect in February, after the last appeal was dismissed.

Robert Wiygul is a coast attorney who represents many people affected by the spill.

"What this settlement does: there are payments that are available if a person developed certain kinds of physical conditions around the time of the oil spill," he says. "Those are things like headaches, skin rashes, exacerbation of pre-existing asthma, and things of that nature."