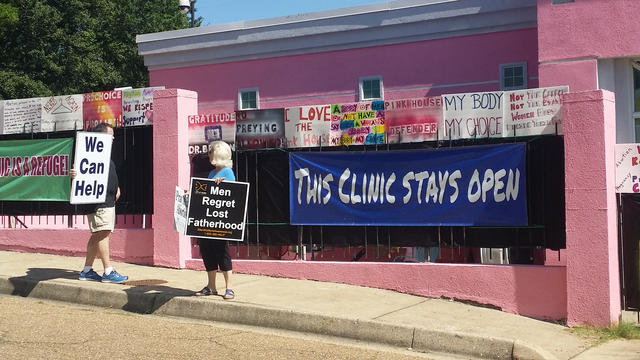 Mississippi’s only abortion clinic will remain open while a lawsuit continues over a 2012 law that required clinic doctors to have admitting privileges at a local hospital.

The Fifth Circuit Court of Appeals in New Orleans upheld a lower-court ruling that blocked the part of a 2012 Mississippi law requiring doctors at the clinic to have admitting privileges at a local hospital. It found the law would in effect close the state’s last abortion clinic, the Jackson Women’s Health Organization.

Julie Rikelman is an attorney with the Center for Reproductive Rights, which filed the lawsuit on behalf of the Jackson clinic.

"The state tried to argue that it didn't matter if all access to abortion in Mississippi was eliminated because Mississippi women could simply travel to nearby states to try and access abortion in those other states," she says. "And what we said is that's not how the constitution works."

In a two–to-one decision, the court agreed, writing that "Mississippi may not shift its obligation to respect the established constitutional rights of its citizens to another state."

The appeals court upheld the preliminary injunction that allows the clinic to remain open while the lawsuit brought by the clinic winds its way through court.

State Rep. Sam Mims of McComb, the author of the original 2012 law, said he was disappointed by the court’s decision.

"This legislation has always been about the best possible health care for women who receive abortions," he says. "I still believe that having physicians obtain privileges at a local hospital makes sense. Several other states around the country have enacted this same type of regulation on their own abortion clinics."

In a statement, Mississippi Governor Phil Bryant said he was disappointed by the ruling but noted it was issued by a divided panel of judges.

He added that he plans to work with the Attorney General as they petition the entire court to hear the case.