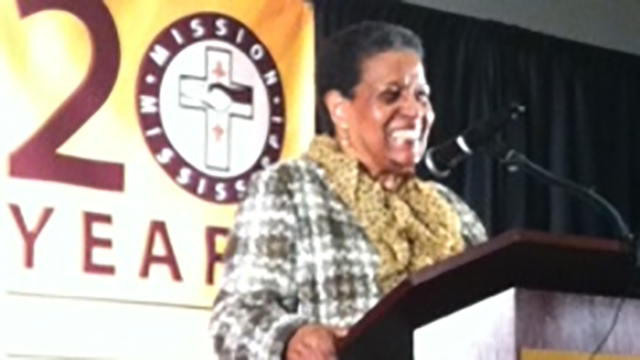 During the Governor's Prayer Luncheon Myrlie  Evers-Williams told more than 800 that she's glad to be back home. However, she said she struggled with wanting revenge after the death of her husband Medgar Evers in 1963.

"There have been many changes within my own heart, changes within Mississippi but also the realization that we still have major racial problems in this country. And I'm just pleased to see Mississippi begin to lead other states as human beings not white or black."

Medgar Evers was a civil rights activist involved in efforts to overturn segregation in Mississippi. He also served as field secretary for the NAACP. Evers-Williams says even though she didn't always agree with her husband’s methods she remains proud of his lasting legacy.

"In his beliefs and his actions have actually left instructions for others who actually feel the way that he did to hold on to those dreams to move forward in non vicious ways. And he has answered to the one that says well done my good and faithful servant."

Over the past 50 years Mississippi has seen marked progress. Secretary of State Delbert Hoseman says that makes him even more optimistic about its future.

"When you look at the number of elected officials of color in Mississippi,  people on the courts, cities and everything we have become a biracial society. And we're able to work together, our schools are integrated now for three generations we've gone through that. We've made a lot of progress in our state and  we're not our fathers fathers Mississippi anymore. And she's a great example, I think it’s a wonderful she's home."